Darren Ritter is a candidate in the Chicago Fire department who froze during his first fire, but still managed his first save in Chicago Fire.

Engine newbie Darren Ritter is a firefighter candidate who was originally assigned to Engine 37. After he freezes up on a call he gets booted from Engine 37. He decides to leave the CFD, but Mouch talks him out of it and he joins Engine 51. 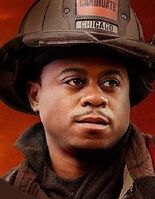 Retrieved from "https://fbi-chicago-franchise.fandom.com/wiki/Darren_Ritter?oldid=36653"
Community content is available under CC-BY-SA unless otherwise noted.