Peter Stone was the Deputy Chief of the Special Prosecutions Bureau in the Cook County State’s Attorney’s office on Chicago Justice. He was a Pitcher for the Chicago Cubs but was forced to retire after he tore his UCL. After his father, Benjamin Stone, passed away he became the Assistant District Attorney assigned to the Special Victims Unit in Manhattan, New York.

Prosecutor Peter Stone, the ambitious Deputy Chief of the Special Prosecutions Bureau. Relentless in his quest for justice, it's more than a job, it's a purpose. Son of renowned New York City District Attorney Ben Stone, Stone is shooting at a target that only he can see. 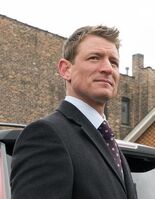 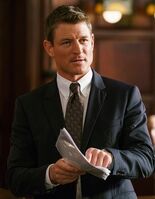 Retrieved from "https://fbi-chicago-franchise.fandom.com/wiki/Peter_Stone?oldid=36681"
Community content is available under CC-BY-SA unless otherwise noted.