Sheryll Barnes is a special agent with the Federal Bureau of Investigation on FBI: Most Wanted.

FBI Agent Sheryll Barnes is an ex-NYPD detective with elevated street smarts thanks to undercover gang work in the Bronx. Often referred to by her surname, Barnes is a kind soul, gentle and empathetic with victims and affectionate of her team. This is not to be mistaken for weakness; when interviewing suspects and while undercover, Barnes is cool, confident, and tough as nails. As a woman and an African American, Barnes occasionally faces sexist and racist comments from suspects, but she handles them well.

In Caesar Barnes reveals her past of undercover work in the Bronx, NY. After a single suspect massacres several gang members, Barnes resumes her old undercover identity to catch the suspect when she discovers an old friend is mixed up in the situation. When she contacts this friend, a nurse named Sandra, we find she meant a little more to Barnes, and that she is sneaking epilepsy medication to their main suspect, Cleo. During a meeting with Cleo, the new head of a strong gang, Barnes impresses Cleo by staying cool when Cleo shoots a snitch in her gang. Cleo agrees to work with Barnes, who proposes a good business gig running product in the high streets of the city.

The following morning, Sandra becomes upset when Barnes agrees to meet with Cleo, and Barnes spills that she's FBI and is thrown out by Sandra. Surprisingly, when Barnes goes to get into a van with Cleo, Sandra appears and insists on accompanying Barnes. At the gang's destination, which turns out to be an ambush by the FBI, Cleo briefly holds Sandra hostage. Barnes and LaCroix reason with Cleo, and she eventually gives herself up.

In Predators Barnes becomes emotionally disturbed at the violence with which their main suspects rape and murder their victims, and is disgusted by the joy they take in their actions. She and LaCroix have a discussion about this after meeting an elderly gentleman who fell victim to their suspects but survived. Barnes then encourages LaCroix to address the rest of the team about how emotionally taxing such cases can be. 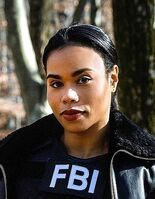 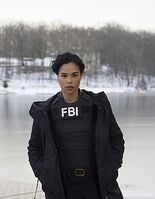 Retrieved from "https://fbi-chicago-franchise.fandom.com/wiki/Sheryll_Barnes?oldid=34628"
Community content is available under CC-BY-SA unless otherwise noted.